Arriving to early can give consequences 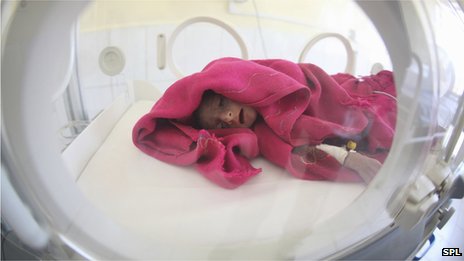 One in 13 babies are born before 36 weeks

Being born prematurely is linked to an increased risk of a range of mental health problems much later in life, according to researchers.

Bipolar disorder, depression and psychosis were all more likely, the study in The Archives of General Psychiatry suggested.

The overall risk remained very low, but was higher in premature babies.

Experts cautioned there have since been significant advances in caring for premature babies.

Full-term pregnancies last for around 40 weeks, but one in 13 babies are born prematurely, before 36 weeks.

Researchers at the Institute of Psychiatry at King’s College London and the Karolinska Institute in Sweden analysed data from 1.3m people born in Sweden between 1973 and 1985.

They found 10,523 people were admitted to hospital with a psychiatric disorders, 580 of those had been born prematurely.

Very premature babies were more than seven times more like to have bipolar disorder and nearly three times as likely to have depression.

One of the researchers, Dr Chiara Nosarti, said the real figures may be higher as milder conditions would not have needed a hospital visit.

However, she cautioned that the risk was low and the vast majority of premature babies are perfectly healthy.

She told the BBC: "I don’t think parents should be worried, but we know that preterm birth confers an increased vulnerability to a variety of psychiatric conditions and perhaps parents should be aware of this and monitor early signs of later more serious problems."

She speculate that "disrupted development" may affect the babies’ brains.

The chief executive of the mental health charity SANE, Marjorie Wallace, said: "We already knew that premature birth may be linked to schizophrenia, but to see evidence linking it to a range of psychiatric conditions which required hospitalisation is striking."

The baby care charity Bliss said it was well-established that early birth can affect the developing brain.

However, its chief executive Andy Cole cautioned that some of the people in the study were born "40 years ago and that neonatal clinical practice to limit neurological damage has been transformed over the past four decades, with significantly improved outcomes seen today."

There have been developments in cooling the brain to reduce any damage as well as improvements in ventilation to ensure enough oxygen is getting to brain.